written by priyankasirohi
This week I’m flying back home for a cousin’s big fat Punjabi wedding.
And while I have big plans to spend my savings shopping in Delhi. I’m sure I’ll make a stopover at that small overflowing book store which sells used book.

Sometime early this year I bought two cookbooks from that very shop at a great bargain.
Now before I go and buy more, I wanted to do justice to the ones already sitting on the shelf looking at me with their longing eyes. 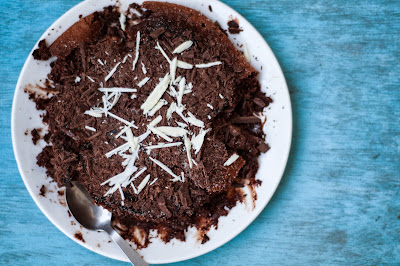 I had never heard of this book and search on amazon didn’t really brought up any option or reviews.
So experiment it was on a very lazy Saturday afternoon. 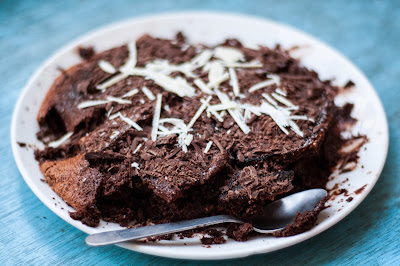 The cake kept me on my toes till the time it had its full rest and out it came, absolutely messy but super moist and yumm. Ozzy can give you a word for it. She had hard time leaving it for the photo-shoot.

Exactly how the picture was on this beautiful inspiring book.

The recipe was sourced from Good Housekeeping Cookery Club – Chocolate

Put chopped chocolate into a heat proof bowl over a pan of simmering water  along with butter and leave it until melted. Remove from heat, add Brandy / Coffee and stir.

In a medium bowl, place egg yolks along with half the sugar and whisk until pale. Stir in the chocolate mixture.

In a another bowl, beat egg whites until stiff. Gradually add in the remaining sugar with cinnamon.
With a spoon, fold one dollop into a chocolate mixture to loosen it. Then carefully add the remaining stiff whites until incorporated. Do not over mix.

Transfer the mixture into a prepared pan. Bake for 30 – 40 minutes until risen from center and is not wobbly.

Leave to cool in a pan. The cake is going to fall and become dense. Don’t fret.

Transfer the cake to a serving plate and decorate with sugar dusting and chocolate shavings.

Cherry and Peach Clafoutis and ‘I miss you’...

mmmm… mouthwatering…. you are tempting me too much!