For the first time ever I knew in advance what I was going to bake for Sid’s birthday.
That’s very rare as I am usually not a very organised person. I hunt for recipes at the last minute, raising expectations and then fighting tooth and nail to meet them.
But this time I knew, no confusion, no last minute changes…none! Yay! 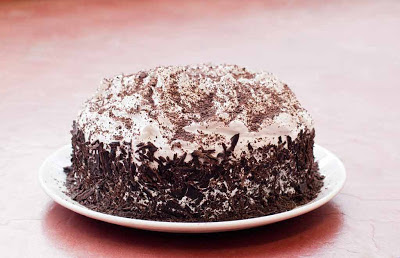 Last year’s birthday cake was beautiful and delicious! Even if it was a result of my cravings more than his birthday, yet it was very well received.
But this years Black Forest bewildered us all. It was not just beautiful mountain peaks but also the yummiest cake we’ve ever had.
{Lots of chocolate, lots of cherries, lots of spiked cherry syrup and lots of whipped cream} 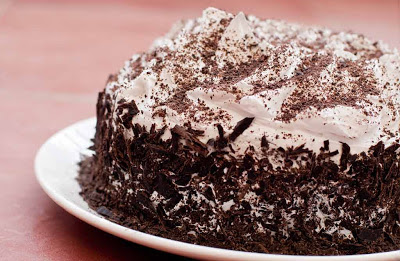 His birthday is one day when I love to push myself to limits I never believe are attainable. He gives me support and confidence in myself.

A small can of Cherries

In a large bowl, whisk the flour, baking powder, baking soda and salt. In another bowl, mix boiling water with cocoa powder until smooth.

On a medium speed, beat butter and sugar together until light and fluffy. To the mixture add eggs, one by one. Beat in buttermilk and vanilla extract.

Turn to low speed and add in 1/3 of flour mixture, followed by 1/2 of chocolate mixture. Repeat with the remaining mixture until just incorporated.

Divide the batter (about 1 cup) and pour into the prepared pans, smoothing the surface. Bake for about 13 to 15 minutes or until toothpick comes out clean.

Place the cakes on the wire rack to cool. Let them cool completely before frosting.

For the frosting: Beat whipping cream in a large  bowl on medium speed until light and fluffy and just double in volume.
Deseed and roughly chop cherries. Mix half a cup of cherry syrup with two tsp of rum ( if using).
For assembling: Place one cake layer on the serving plate and soak it with Cherry syrup following with chopped cherries. Spread about 1/2 a cup of frosting on the layer. Repeat this process with the second layer too. Smear the rest of the frosting on the sides of the cake.

On top throw spoonful of frosting while pulling up the ends to form peaks from the whipped cream.
Cover the cake with chocolate shavings and cherries (if you like).

Cover and refrigerate the cake. Leave out in room temperature for a while before serving.

Tiramisu in a Jar ~ Quick recipe for...

Loved your recipes.. I am bookmarking your blog!!
Looking forward to a lot more in the future…

Thank you for your kind words. 🙂